Everyday’s an endless stream
Of cigarettes and magazines… 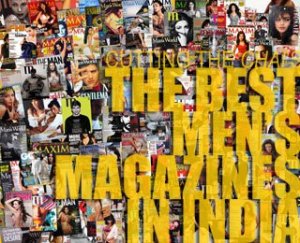 On cigarettes, I’ve posted before and magazines are a recurring theme on this blog. Since I shouldn’t be ranking the best cigarettes in India, I thought of arranging at least the men’s magazines in the right order, especially since almost all of them in one way or the other claim to be the best Indian men’s magazine.

After a drought that spanned for almost the entire history of magazine publishing in India now there is a deluge of mainstream men’s magazines on the newsstands.

The only monthly drizzle in this waterlessness was a monthly called Gentleman, which after decades of well appreciated presence ceased publishing in 2001.

The vacuum left behind by Gentleman was for a few years filled by Man’s World, which first hit the stands in 1999.

Drawing up the list wasn’t that difficult (but ordering them was). It was to include only the mainstream general interest men’s magazines and therefore those (don’t know if all from my growing up years still exist) of the adult’s only variety have been excluded. Anyway, they wouldn’t have been much of a competition.

The initial list had eight names (in alphabetical order):

A little thinking, shortened the list by two for the final nominations.

Debonair – though it no longer features topless female models and has also toned down its content – is yet to regain some of the class. The issues that I flipped through didn’t appeal much.

Men’s Health was excluded because of it’s name and content. Though the magazine might not have only health-related content between its covers but the primary focus didn’t match with the criteria of this ranking.

Left with six titles, and evenly matched too – three of Indian origin (The Man, MW and M) and three Indian editions of foreign magazines (Maxim, FHM and GQ). Only if Gentleman hadn’t shut shop and Bennett & Coleman had continued with GT (It’s a Guy Thing) it would’ve been even more interesting.

Before the final ranking, the hors d’oeuvre:

Though The Man offers the best value for money amongst the competition, it doesn’t rank high on other counts.

We need our monthly dose of content and a bimonthly amidst all the monthlies isn’t very exciting – especially when the content served isn’t something worth waiting 60 days for. To make things more complex for the reader the people at Malayala Manorama (the company behind the magazine) do not even seem to get a freeze on the periodicity. It was once a quarterly, then became a monthly only to hastily turn into a bimonthly.

The layout is unimaginative and boxy and the humour quotient is low (though humour alone doesn’t make a good men’s mag – as this list would reveal). And their website too doesn’t add any value.

Being an internet person, I take offence on not being able to easily locate the website address on the print edition especially when one exists. The Indian edition of i is one such. But their website isn’t the reason behind the ranking (this after all is a ranking of the magazines and not the websites).

The first copy of GQ that I bought and spend a while reading resulted in a yawn. I never had access to the international editions of GQ (unlike Maxim and FHM‘s videshi editions that were sold by kids at Delhi traffic lights), but expected some excitement from the newest kid on the block in the Indian men’s mag market.

There are too many men between the covers. I think that straight men still have a larger share in the demographic pie. And too less humour. The presentation too is insipid.

But GQ seems to have improved by the issue, though not by much. Hopefully by their first anniversary issue, I’ll look forward to becoming a regular reader.

Much like The Man, M too had its share of periodicity pangs. For a better part of its existence it was a bimonthly and to my liking it turned into a monthly (from July 2008). It its bimonthly avatar the magazine used to be an unwieldy behemoth. Now it is comparably more manageable.

In some of the pages there are interesting experiments with page design. There’s some food for thought, but not much of fun. Too much space is wasted on full and even double-page images of men!

A name like M isn’t very search engine friendly too.

Overlying the FHM masthead on the cover the text says, “Voted the Best Magazine in the World”, pity this list doesn’t give the magazine similar reverence.

FHM tries to mix everything that a man would need, including those silly personality profile tests. But rival Maxim manages to package things better. Like Maxim it has the advantage of content from sister
editions the world over, but there is still something missing – a little bit of salt.

Maxim is funny and also makes fun of the people involved in making the magazine. That builds a personal relationship with the readers. But sometimes the effort shows.

The magazine has quite a lot of goods – in all senses of the term. There are women practically overflowing from everywhere and gadgets, jokes, cars, accessories manage to elbow in some space. The worst part is that it ends too soon. There isn’t enough to read, the focus is on the visual pleasures.

While M and The Man had periodicity problems, Maxim took a while to get the price right. They even tried packaging in digital editions and other stuff in CDs to lure readers. But in India the MRP is the biggest bait.

The oldest of the lot. And uses experience to its advantage. It recently (January 2008) went for a makeover for what they termed as a bigger, bolder look. Look it does better, but the size is a bit too big. Man’s World is an inch longer and wider that the much better proportioned Maxim. And yes, it’s preferably MW – like JLo, JFK… (or because of GQ, FHM?)

Now what would be the proper name to call the magazine by? MW or Man’s World – both names are registered with the Registrar of Newspapers. But the registration number printed on the back cover corresponds to MW whiile the website’s title reads Man’s World. We should get a fix on this once and for all.

The print is small, the page is big, photos many but not oversized… takes hours to reach from one cover to the other. And the journey is worth the time. Amazing regular line-up of contributors. No other men’s magazine in circulation manages to even come close. Beautiful hot women, but not an overdose (actually it isn’t possible to have an overdose of beautiful women). Men also get cover space. Both the brains and the things down under are taken proper care of. In short the best than an Indian man can get.

Hope no one sues me for any not-so-complimentary observations 😉