The song that is on the tip of the tongue of every Hindi-film-loving Indian smoker is getting a paint job. Dev Anand starrer Hum Dono (1961) will be soon released in colour (a la Mughal-e-Azam and Naya Daur). Mohammad Rafi’s colourful rendition of the song penned by Sahir Ludhianvi and composed by Jaidev will have Dev Anand puffing Hindi cinema’s most famous cigarette in a watercolour-like enviromnent.

Though not with an intention to celebrate the much admonished hard-to-break habit of smoking, I’ve put together collection of cigarette advertisements in India right from the late 18th century to the early 21st century just before advertising for tobacco products was prohibited by the promulgation of the Cigarettes and Other Tobacco Products (Prohibition of Advertisement and Regulation of Trade and Commerce, Production, Supply and Distribution) Act, 2003. [pdf]

Lest I am accused of violating the spirit of the act, here are a few anti-smoking messages (they usually quite creative) as a deterring-prelude.

Believe it or not, he actually smokes 20 different brands. Passive smoking, deadlier than you think (WHO and Ministry of Health and Family Welfare)

Between the two of them, they smoke fifteen cigarettes a day. Passive smoking, deadlier than you think (WHO and Ministry of Health and Family Welfare) 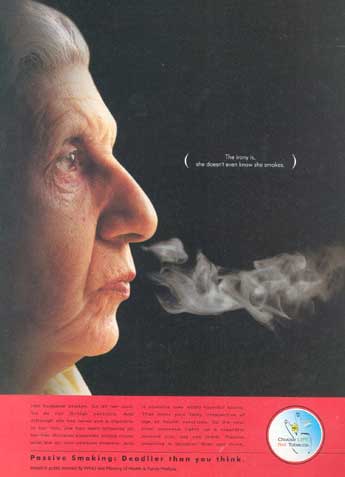 The irony is she doesn’t know she smokes. Passive smoking, deadlier than you think (WHO and Ministry of Health and Family Welfare)

One puff and a slap of fine of Rs 200
Under Sec. 4 of the Cigarettes and Other Tobacco Products (Prohibition of Advertisement and Regulation of Trade and Commerce, Production, Supply and Distribution) Act, 2003 smoking in railway premises including trains, stations, waiting halls and offices is prohibited.
South Eastern Railway
Striving for a tobacco free environment

O&M’s brilliant take on one of the world’s most popular campaigns, that of the Marlboro Man and his horse. The ‘Second hand smoke kills’ campaign went on to win numerous awards (Cancer Patients Aid Association)

Another gem from the O&M stable. Succinct and sure. This won the Gold Lion in the ‘Outdoor Public Health and Safety’ category at the Cannes Lions International Advertising Festival 2003 (Cancer Patients Aid Association)

(This collection does not necessarily reflect the best in India’s tobacco advertising. It is an exercise of convenience rather than comprehensiveness)

Support the Indian industry by smoking guaranteed Indian made Nizam, Vazeer & Gold Tipped Nizam.
Packed in packets of 10 each.
Made in India! By Indians! For Indians!
Registered
Ask your tobacconist for
Nizam, Vazeer & G.T. Nizam cigarettes
Manufactured in Bombay by John Petrino & Co.

An ad for cigarettes for women from the 1920s. The copy reads:
On every lip “Maspero” Specials & Felucca. The same high quality at Rs 3/12 per tin of 50. Sold by all tobacconists. A Maspero tip. 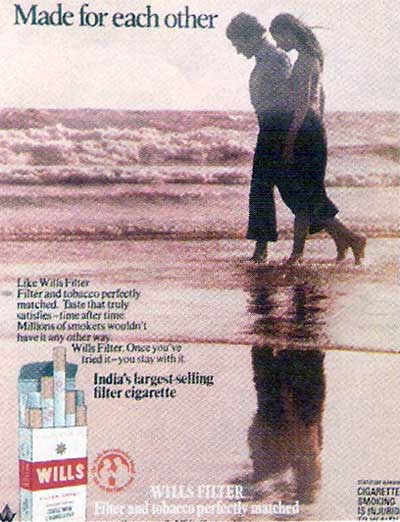 One of the most popular cigarette brands in India – Wills Navy Cut’s advertising campaigns has the highest recall value. Their ‘Made for each other’ campaign spanned generations of cigarette smokers. Here’s an early Wills ad, when it was called ‘Wills Filter’ and old timers still do, some
say ‘Filter Wills.’ From the mid or late 1960s.

In 1969 ITC, the manufacturers of Wills, introduced the Wills Made for Each Other contest to select the perfectly matched couple. Which half forms the paper rolled tobacco and who’s the filter is a topic of an unending debate.

A few tobacco crops later, the branding changed to Wills Navy Cut – Filter Tipped. And the ad text evolved to:
Made for each other filter and tobacco perfectly matched
What tobacco men call marriage – the marriage of the right tobacco with the right filter – is what makes Wills Filter Tipped extra special. A filter cigarette as good as Wills is not just a good cigarette with a filter at one end – it is a good filter cigarette. The fine tobacco in Wills are specially blended to match the filter, enhance the taste. That is why you will find Wills Filter Tipped so satisfying. So many discriminating smokers already have.
they’re great… they’re Wills
Rs 1.20 for 20; 60 paise for 10

Made for each other in 1994. The models had changed but not much difference in the theme and also the copy.

Wills Navy Cut in a more modern avatar, not the ad, the packaging (2001)

Celebrating the arrival of 2003

A Wills ad from April 2004. Would be among the last ones to appear in mainstream print.

The copy reads:
Smoothness has never been so satisfying
Charminar GOLD Filter
Rs 1/95 for 20
Local taxes extra
Such a rare combination: smoothness, but with all the taste, all the satisfaction.
Just what you always wanted: Charminar GOLD

Gold Flake is by far the most popular cigarette brand in India (when I last saw the stats). 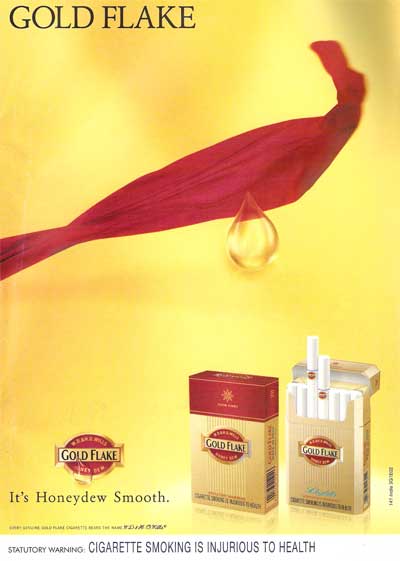 Wills Classic. Discover a passion. For those who value taste (2003)

India Kings. One of the premium cigarette brands in India. (2004)

Godfrey Phillips. There can be no fire without passion. 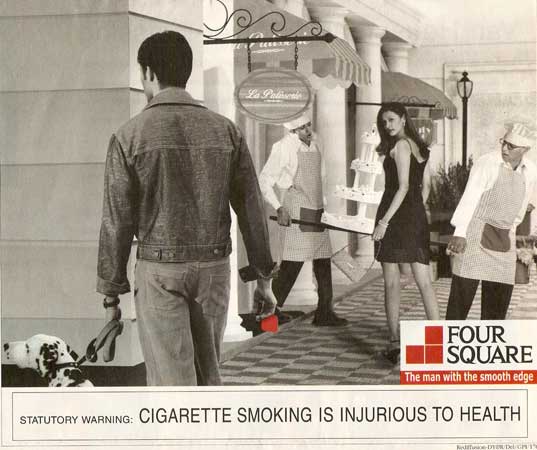 Four Square. The Man with the Smooth Edge.

Here are some that I borrowed from Vinayak’s post at At the Edge. Vinakak Vinayak has a growing collection of vintage Indian print ads.

Give me a bike.
Give me a highway.
Give me my girl.
And give me the taste of toasted tobacco.
Toasted taste made milder.
That’s the way I like it.
Discover the taste of toasted tobacco enjoyed by millions the world over. Now made milder and captured for your smoking pleasure in Charminar Filter.
Charminar Filter
Main dealer: Vazir Sultan & Sons, Hyderabad

Live life Kingssize
Four Suqare Kings
All the taste, all the way
(Input from Vinayak: Four Square Cigarette ad featuring Suresh Oberoi from 1970s. I think the woman in the background is Supriya Pathak.)

Bookshops are for browsing
And it was Sunday morning…
At last I found what I wanted
So had she.
This called for a quick plotting or I’d get shelved.
Visa Filter Kings Cigarettes

The ads have been scanned from old copies of Outlook, India Today, Parade, Man’s World, The Times of India, The Statesman, The Week, Frontline; sourced from Indian Advertising 1780-1950; and downloaded from the internet. Dates for the early advertisements are assumed and may not be precise.