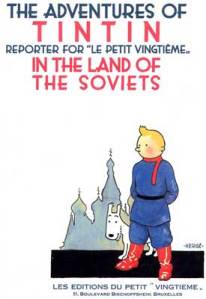 Tintin and his loveable whisky-loving and faithful fox terrier friend Snowy kept me in adventurous company during many a rainy afternoon. I owned very few of Tintin comics, the price was a big deterrent, but read almost all of them thanks to the comic exchange programme that we friends practiced. One which I missed was the very first one, published in 1929, Tintin in the Land of the Soviets (the other was the last but semi-complete – Tintin and Alph-Art).

Wilfing on the Internet the other day, I accidentally discovered Tintin in the Land of the Soviets on Scribd. Though the artwork in Tintin’s first adventure is a far cry from the ones later ones which carried our young reporter (though he’s rarely seen doing what reporters usually do) and his four legged friend to different parts of the world (including India, particularly the kingdom of Gaipajama, complete with all the stereotypes of fakirs and the Indian Rope Trick).

The comic book though meant for children is also a critique on different existing political systems. Be it the coup curry of Latin America or the Japanese interference in China. Hergé or Georges Remi (this was a favourite question of quizzards during our time as the name Hergé is a result of transposition of Georges Remi’s initials) did support monarchy as depicted by Tintin’s friendship with the Maharaja of Gaipyjama or his help for King Muskar XII of Syldavia in King Ottokar’s Sceptre. Tintin in the Land of the Soviets shows the Bolsheviks in a very poor light (very unlike what we were taught in the school texts during our time) and this was perhaps the reason why the comic was not available in India. A few examples:

Tintin had inspired a number of people to produce unofficial comic books – one being Tintin in Thailand where Tintin goes on a ‘sex holiday’ to Thailand (it also features almost all of the major characters) – and I too produced one. I was 14 and in Class VIII when I put my very own Tintin adventure on paper (with pencils, a black Pilot pen and Camlin sketch pens), titling my work Tintin in Shilliont, keeping alive Hergé’s tradition of fictitious lands based on real places. Shilliont was Shillong. But unfortunately, I lost that comic. If I remember right, Kisholay Ray (now a budding photographer), a good school pal, who had a much better hand at drawing than me also had his own version.

Though an animated series on the Adventures of Tintin had appeared on television, which I rarely missed (now I’m again rerunning them on my mobile), nothing beats the experience of the comic book in paper.