Reservation is a dirty word. It symbolises exclusion rather than what it purportedly strives to achieve – an inclusive egalitarian society. Of late I have been reading a lot of pro-reservation/quota literature and though there are many substantial arguments in them, the idea of forming watertight compartments for the betterment of the historically underprivileged doesn’t seem to be convincing enough. Instead of accepting that the present percentage-based straitjacketed formula is seriously flawed, the champions for the caste-based cause take refuge in the census and emerge out with percentages.

The less-privileged should be given leverage, rather than made to sit in reserved compartments, while the others (more privileged by virtue of caste and caste alone) get involved in a fist fight for the seats in the general compartment, where again the more meritorious of the less-privileged wouldn’t (and shouldn’t) be denied a berth. There’s a lot wrong with the present system and instead of rectifying what’s wrong, the number game’s on. Statistics is a very helpful tool in analysing happenings and predicting trends, but a small seemingly innocent tweak here can cause a huge difference there.

The for-reservations lobby tends to view the non-beneficiaries of the reservation system as a homogenous urban, well-fed and deep-pocketed class. A look at the same set of statistics they quote from, will tell how far the realities are.

Let me do some crystal gazing. Reservations once in place are very difficult to roll back. In case the formula of quota leading to advancement works, the have-nots of today will become have-mores tomorrow. An improvement in the socio-economic and educational stature will ensure that they occupy a chunk of the 50 percent (if not lesser) open seats, coupled with multilevel benefits in exemptions, scholarships, jobs (both government and private), promotions. Where does it leave the progeny of the ‘privileged’ class of today? Without the necessary avenues, they’ve either become militants or have been sidelined in the margins of the society – the ‘neo-backwards.’ The righting of a 3000-year-old historic wrong. Social justice in its truest form.

My crystal’s developing cracks, so it’s back to the present to the lens of my camera. A peaceful anti-reservation rally of thousands – medicos, engineers, chartered accountants, lawyers, corporate executives, university students, teachers, parents, school students… under the banner of Youth for Equality marched from Maulana Azad Medical College (Dilli Gate) in the older Delhi to the vicinity of Jantar Mantar in Lutyen’s New Delhi. The sloganeering was saved for the last – it was silent throughout – with big-mouth Navjot Singh Siddhu (perhaps the only politician to come out so openly in support of the anti-quota movement) trying to build a youth-leader image for himself in his typical exaggerated style and management guru Shiv Kheda motivating the protesters.

These guys get their calculations right

Do You Does It

That’s the biggest bank out there

No reservation is also a caste

Past Tense about Future 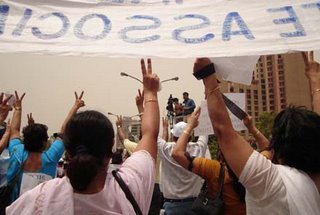 The Neta and the Guru

Clutter of Cameras of the Still Kind

A Million Woes in Ink

Update: Making Sense of Mr. Mehta – A rebuttal on Vinod Mehta’s contentions on the reservation issue [May 31, 2006]